I am unsure where I first heard it, but I remember being told earlier in life that a rope is a rope until it is given a function or job, such as climbing, rigging, winching, etc. Once it is designated with a function, it becomes a line. Climbing lines keep us tied in safely and allow for better work positioning while rigging lines allow us to lower heavy loads in a safe and controlled manner.

On every job site, ropes or lines, play an integral part in the day-to-day work of arborists. Without ropes, it's hard to imagine anything productive being accomplished. We owe a great deal to our ropes as we certainly put them to work.

It is common knowledge that our ropes are subjected to environments that other industries might find less than desirable, or even alarming. Our ropes interact with dirt, bark, sawdust, foot and hand ascenders, rain, and a myriad of other things that provide less than favorable conditions for ropes. Given that we put our full trust in our ropes and use them to accomplish our job, it seems fitting that we would understand the construction of our ropes and how this affects their function, performance, and application.

Rope technology has progressed over the years and there are plenty of options available for both climbing and rigging. There are also plenty of color combos to choose from so need to worry about not looking cool while on the job site. The advancement in technology has proven to be beneficial, as certain types of construction have allowed increased strength in smaller diameters and overall lighter ropes. 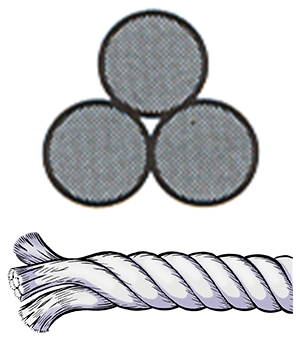 3 Strand construction is well-tested and works great when running a natural crotch rigging set up or for use as a tag line.

The large strands allow for greater heat dissipation compared to other construction types which is why it will hold up well to the abuse of a natural crotch set up. It can give a bit of a bumpy ride when running through a friction device such as a portawrap or an aerial friction device such as a Safebloc. It is an inexpensive rope to have in your arsenal and is certainly a proven workhorse.

Although it was used for years as a climbing line, there are many options available that perform and function much better as climbing lines. These ropes tend to “untwist” when loaded and do show more elongation compared to other rope construction types. 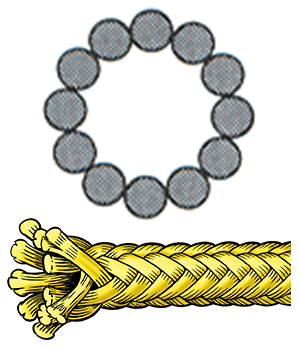 12 Strand Hollow Braids do not contain a core which makes them easy to splice and are the go to for rigging slings.

There have been some interesting and unique ideas over the years for splicing hollow braids. The dead eye sling, whoopie, and loopie are some of the most popular spliced options, but with this construction type we have also been afforded the opportunity to create rigging set ups utilizing products such as the X-Rigging Rings.

This construction provides high tensile strengths and can be prone to picking, but this can usually be fixed easily. Because the Hollow Braid does not contain a core, this rope is not designed to be used as a lowering line, however people have tried, but I cannot imagine it worked very well. 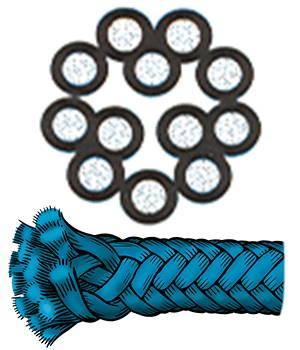 Sticking with 12 Strands, the Solid Braid version is one that has been around for quite some time and is a good all around, multi-purpose rope. These ropes make great lightweight rigging lines and are still used as climbing lines, although they can be a bit bouncy when climbing. And, as said with regards to the 3 Strand, there are much better options available for climbing lines.

These ropes make great lightweight rigging lines and are still used as climbing lines, although they can be a bit bouncy when climbing. And, as said with regards to the 3 Strand, there are much better options available for climbing lines. 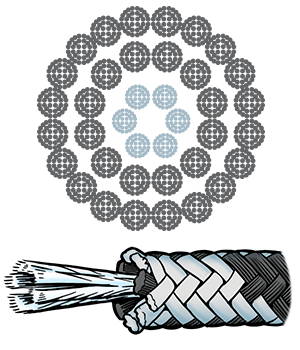 One of the most popular construction types when dealing with climbing lines and lightweight rigging lines is the 16 Strand.

With this type of construction, the jacket is created using 16 strands braided around a core of parallel strands. The jacket is the load bearing part of the rope and the core is filler that helps keep the rope round while in use. Without the core, the rope would flatten which is not what we want with any rope that is running while in use.

If you have ever used a 16 Strand with a hand splice, you will notice the eye flattens easily. This is because the core is removed in the eye for splicing. This does not affect the strength in any way because the jacket is the load bearing part of the rope. This is still a very popular climbing line and works well in natural crotch or false crotch set-ups.

If utilizing a toothed ascender, keep in mind the larger strands can be prone to picking from the toothed cams. This rope works well with anything from a Blake’s Hitch, to a DMM Hitch Climber set up, and even some mechanical devices. 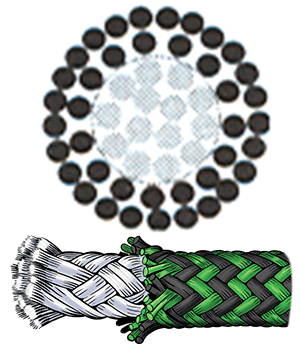 The Double Braid has gained a lot of popularity over the last several years and it does not appear to be slowing down.

Double Braid construction provides high tensile strengths and are available in multiple diameters for both climbing and rigging lines. These ropes are constructed just as the name implies with a braided core covered by a braided jacket.

The majority of Double Braid climbing lines provide a great option as dual purpose ropes for both DdRT/MRS (Doubled Rope Technique/Moving Rope System) and SRT/SRS (Single Rope Technique/Stationary Rope System). Most will have less bounce than the previous ropes and work well with toothed ascenders and mechanical devices. However, these ropes are not well suited to natural crotch set-ups.

The true potential of these ropes are seen when using them in conjunction with friction savers for climbing, and blocks, rigging rings, and friction devices at the base of the tree when rigging.

Because of their construction, using them in a false crotch can cause the core and jacket to travel at different rates causing an increased possibility of the jacket bunching up. If this does occur, it can be corrected by milking the jacket back over the core. Some double braids will milk more than others, however this not a defect but rather a characteristic of the rope construction type. After some use, the rope will settle, and milking will be minimized. This is also the reason the majority of double braid climbing lines are only spliced on one end. 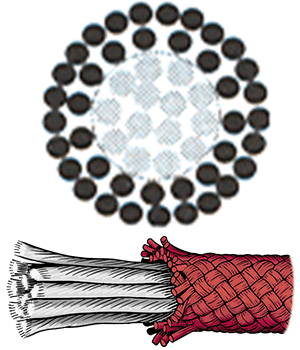 Last, but certainly not least, is the Kernmantle rope. This type of rope has a tightly braided jacket over a core of parallel strands. The strand count on Kernmantles are very high when compared to other construction types with some reaching 48 strands.

On a quick visual comparison it is very similar to a 16 strand, except the Kernmantle handles the load differently. The core is the load bearing part of the rope while the jacket is a protective layer for the core. These ropes are for the most part more static than other rope construction types and are best suited for SRT/SRS climbing systems.

As with Double Braids, Kernmantles are better suited for false crotch applications and because of their static nature are not good choices for rigging lines. They are really at home when used for SRT/SRS climbing.

One way of breaking it down is the lower the strand count of the rope; the better suited the rope is for natural crotch set-ups. This is certainly not scientific, but it will get you close.

This is certainly a broad overview of rope construction and introduction about what goes into the making of a rope. Manufacturers spend a lot of time, energy, and resources toward breakthroughs in the rope. At times, we may take our ropes for granted and forget a rope is not just a rope. A great deal of innovation goes into the braiding, angles and tension of the braids, materials, etc. that in the end form a rope that we then give a job, and the rope becomes a line.